Now, I’m about to start a series tonight with the youth in the book of Judges you’ll have to forgive me, my mind is in that vein already so that’s where we’re going to start in scripture.  But before we get there I want to try to set the stage for where we’re looking in the Bible today.  I want you to all imagine that a few years back you were wandering in the desert and it took you forty years of wandering.  After those forty years, the person leading you is this guy named Joshua and he says it’s time to leave the desert and move to a place that has been promised to you since before you were born.  You start following this Joshua guy out of the desert and you eventually come to a river.  Joshua tells you that you have to go through the river and you’re thinking he’s insane because that river is way too large to pass with all your families and their belongings.

Now Joshua has been talking to God and when you get to the river, God splits the river before you and you walk on dry land across that river.  You’ve crossed the river and now you can see that there are people living here already.  They aren’t too happy about you trying to move in and they want to fight you.  You come up to their city and there are giant walls protecting you.  Joshua tells you that you have to march around the walls because God said that if you did, he would take care of everything.  So, you march, and you march, and you march. Well eventually, the walls fall down, and you win the battle against that city.  God broke down the walls and he won your victory.  You continue to fight these people in this land that was promised to you and every single battle you go into, it looks like you should lose but you win because God is winning every battle for you.

That sounds pretty cool to me.  Every physical or military barrier that has gotten in your way, God has removed it in one way or another.  That is exactly where Israel is at where we are going to start reading.  If you would turn with me to Judges 2:7-11.  It says:

“7 The people served the Lord throughout the lifetime of Joshua and of the elders who outlived him and who had seen all the great things the Lord had done for Israel. 8 Joshua son of Nun, the servant of the Lord, died at the age of a hundred and ten. 9 And they buried him in the land of his inheritance, at Timnath Heresb in the hill country of Ephraim, north of Mount Gaash. 10 After that whole generation had been gathered to their ancestors, another generation grew up who knew neither the Lord nor what he had done for Israel. 11 Then the Israelites did evil in the eyes of the Lord and served the Baals.”

Joshua was a good and godly leader.  He kept Israel in proper standing with God throughout his life.  There were even leaders after Joshua who managed to keep things going in the right direction.  But soon after all of those elders died, things go downhill.  The generation who witnessed God do amazing things coming out of the desert has died, and people are now turning away from God to worship false gods.  There’s a disconnect somewhere.  It says this new generation that starts the book of Judges did not know God or what God had done.

Joshua’s generation, the one who left the desert, was actually given a very important command by Moses, it’s so important that today it is a pillar of the Jewish faith.  It’s called the Shema and it’s found in Deuteronomy 6:4-9.  It says:

Moses clearly gives Joshua’s generation the command to teach the next generation about God, to tell them of the things he has done for them.  If Joshua’s generation truly did this, this new generation in Judges could not be accused of not knowing God.  They could be accused of not obeying God, not following God, not fearing God, or maybe even not caring about God.  The one thing that would not fit, would be saying that they did not know God.  It is clear that once Joshua and the elders around him died, Israel as a whole dropped the ball.  They did not pass on the legacy of what God had done.  Joshua may have, but just having a leader passing on God’s legacy is not enough.  It was all of Israel’s responsibility to pass on God’s legacy.

The reason I bring this up is that the actions of this new generation in Judges reminds me of the next generation in America.  Judges 21:25 tells us that in those days, everyone did what they saw fit.  Today, we hear, “It’s true if it is true to me,” or, “it’s right if it is right for me.”  Both the statements from today’s generation and the statement in Judges scream of moral relativism.  They both stem from an idea that there is not a standard of absolute truth.  Both statements elude to either saying there is no God or that God and the Bible are not truth.  Just so we are clear, I don’t agree with that at all.

Now, with the similarity between this next generation in America and the new generation in Judges, is there a possibility, that maybe there was a previous generation that dropped the ball when it came to pointing young people toward Christ?  Is it possible that in our attempts to share God, all that was really shared was legalism and a list of rules, rather than a savior, protector, and father?  And honestly, I don’t want to be too hard on any generation here, I truly believe that every intention from previous generations was completely pure in trying to share the gospel, but the methods of doing so may have been slightly misguided.

Now, I may have just painted a hopeless picture and it seems like all I left is a problem, but let me tell you, there is still hope for us to reach the next generation.  There is a way to make up for the issues left by some past generations.  You see, Judges shows us what happens when you don’t pass on God’s legacy, but in the books of 1 and 2 Kings, we can see what happens when we do pass on God’s legacy.

In 1 Kings 17, we are introduced to a guy named Elijah.  Elijah is a prophet of God in Israel.  Now, God uses Elijah to do many amazing things while pointing Israel back to God in a time when they completely turned away from God.  In 1 Kings 19, Elijah meets a young man named Elisha.  So, Elijah takes Elisha on as his servant and his student and Elijah spends the rest of his life with Elisha.  Elisha is there when Elijah hears from God and has to tell King Ahab that he is going to lose the Kingdom in 1 Kings 21.  Elisha is also there when King Ahab humbly repents, and Elisha sees that God will spare the destruction of Ahab’s rule until after Ahab passes away.  Elisha is there when Elijah again hears from God and Elijah has to go pass God’s judgment on King Ahaziah for turning to false gods in 2 Kings 1.  When this happens, Elisha is witness to God sending fire from heaven by the request of Elijah.  Elisha is even there at the end of Elijah’s time on earth in 2 Kings 2.  Elisha witnesses Elijah being taken to heaven in a whirlwind.  The most impressive part of this is that Elisha is so familiar with and devoted to God that he knows that Elijah is going to be taken to heaven that day before it happens.  He already knows how to hear the voice of God and feel the heart of God.

Elisha goes on to be a prophet over Israel after Elijah and Elisha fully committed to God, continually speaking to people on God’s behalf and performing miracles at the hand of God.  In fact, Elisha goes on to perform twice as many miracles as Elijah, and his ministry as a prophet lasts five times longer than Elijah’s.  None of these things would be possible if it weren’t for Elijah passing on God’s legacy to Elisha.  If Elijah had not taught Elisha, all this long-lasting change and ministry in Israel would not have happened.

This was all possible because Elijah walked through life with Elisha.  Elijah spoke to Elisha about God.  Elijah showed Elisha the power of God.  And, most importantly, Elijah showed Elisha the love of God.  You might be looking at me and saying, “I see where he talked to Elisha and I see that Elisha was shown the power of God? But how do we know Elijah loved him?”  When Elijah is taken to heaven, Elisha responds in a way that shows how much he loved Elijah and how much he knew Elijah loved him.  Elisha mourns the loss of Elijah screaming “My father! My father!” and tears his robes like the Israelites would do at a funeral.  Now, Elijah is not Elisha’s father, but they had the same kind of relationship that a father and son would have where Elijah poured out the love of a father over Elisha every day.

If we want to see the next generation know God as Elisha knew God, we have to follow the example of Elijah.  We have to speak to the youth about God.  This is both easy and hard to do.  It’s easy because you get to talk about what God has done for you.  But it’s hard because you have to be ready to work through the hard questions in life with youth as you both try to better understand God together.

We also have to show them the power of God.  We need to have the youth in our everyday lives, and they need to feel welcome in our times of corporate worship and prayer.  They need to be able to be there to see God’s hand at work.  They need to see when God answers prayers and when he does something supernatural.  They need to see who God is and what he does as a part of the church at large.  They cannot just be secluded to their own spaces to figure out faith on their own.  They don’t have Jesus junior, they don’t have the Holy Spirit Junior, and they certainly don’t God the Father junior.  They are full-fledged members of the body of Christ.

Finally, and most importantly, we must show them the love of God.  They need to know of the unconditional love of a father who will never turn them away because of what mistakes they make or because of what struggles they have.  That’s what God’s love is.  But they can’t physically see God.  Understanding God’s love is abstract, it’s hard to grasp and hard to understand until you see a person who loves you like God love you.  It makes it concrete and real.  And honestly, who is going to show them that love, unless we do.

If anyone here today has questions about how to do start living this out, come to talk to me or any of the other pastors on staff here at Trinity.  We would love to answer your questions and help you process through what this looks like in our context today. 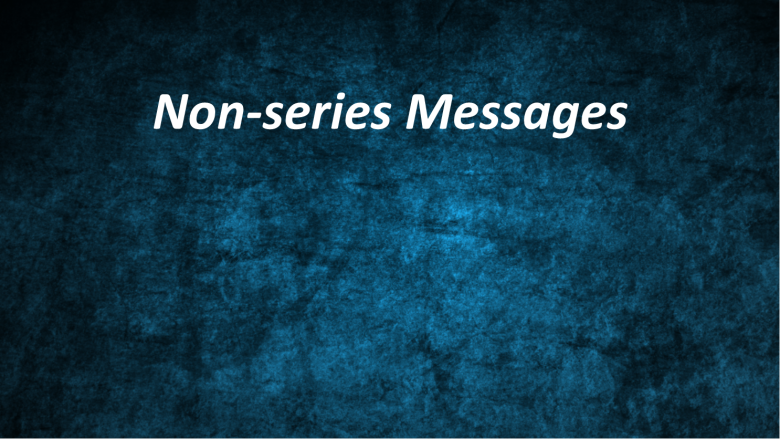