This morning, we are in the second part of our journey through the New Testament book of Acts. Let me offer some reminders from last week:

12 Then the apostles returned to Jerusalem from the hill called the Mount of Olives, a Sabbath day’s walk from the city. 13 When they arrived, they went upstairs to the room where they were staying. Those present were Peter, John, James and Andrew; Philip and Thomas, Bartholomew and Matthew; James son of Alphaeus and Simon the Zealot, and Judas, son of James. 14 They all joined together constantly in prayer, along with the women and Mary, the mother of Jesus, and with his brothers.

15 In those days Peter stood up among the believers (a group numbering about a hundred and twenty) 16 and said, “Brothers and sisters, the Scripture had to be fulfilled in which the Holy Spirit spoke long ago through David concerning Judas, who served as a guide for those who arrested Jesus. 17 He was one of our number and shared in our ministry.”

18 (With the payment he received for his wickedness, Judas bought a field; there he fell headlong, his body burst open, and all his intestines spilled out. 19 Everyone in Jerusalem heard about this, so they called that field in their language Akeldama, that is, Field of Blood.)

20 “For,” said Peter, “it is written in the Book of Psalms: “‘May his place be deserted; let there be no one to dwell in it,’ and, “‘May another take his place of leadership.’

21 Therefore it is necessary to choose one of the men who have been with us the whole time the Lord Jesus was living among us, 22 beginning from John’s baptism to the time when Jesus was taken up from us. For one of these must become a witness with us of his resurrection.”

23 So they nominated two men: Joseph called Barsabbas (also known as Justus) and Matthias. 24 Then they prayed, “Lord, you know everyone’s heart. Show us which of these two you have chosen 25 to take over this apostolic ministry, which Judas left to go where he belongs.” 26 Then they cast lots, and the lot fell to Matthias; so he was added to the eleven apostles.

Here’s the challenge with a portion of scripture like this one—what should be the main focus of the sermon:

We might choose any of these topics because they’re all present in this passage, and all of them would need a great deal of development because they're merely touched on and not developed because this is history.

So, how do we decide what should be preached from a passage such as this? The answer is study and prayer. As I labored over this passage in various study resources, I found all of the topics I mentioned addressed…and yet none of them resonated in my spirit as a topic of this sermon. As I prayed, I kept coming back to the same idea over and over again—I need to preach about Judas. That’s what I’m going to do this morning.

Much like Benedict Arnold, Judas Iscariot is typically remembered for one thing: betrayal. He was one of the twelve disciples who lived with and followed Jesus for three years. He witnessed Jesus’ ministry, teaching, and many miracles.

Here’s what we know about Judas from the rest of the New Testament:

Given the fact of Judas’ close proximity to Jesus during three years of ministry, it’s hard to imagine how he could do what he did.

His story teaches us several lessons:

I could develop any of those ideas in connection to Judas, but I think there’s something else we need to focus on this morning—remorse does not equal repentance.

If “traitor” is the only word that comes to mind when we think of Judas, then we’ve missed the real heartbreak of this story. Yes, it’s terrible that Judas betrayed the Son of God, but I believe it’s even more tragic that he betrayed himself. Let me explain.

When I think of Judas, I can’t help but think that he passed ultimate judgment on himself because he didn’t understand the grace of God that was displayed in Christ.

3 When Judas, who had betrayed him, saw that Jesus was condemned, he was seized with remorse and returned the thirty pieces of silver to the chief priests and the elders. 4 “I have sinned,” he said, “for I have betrayed innocent blood.”

“What is that to us?” they replied. “That’s your responsibility.” 5 So Judas threw the money into the temple and left. Then he went away and hanged himself. (Matthew 27:3-5, NIV)

Rather than make amends or seek forgiveness, “he went away and hanged himself”. You might be tempted to say, “Well, he got what he deserved.” In a legal, moral, and ethical sense, maybe he did get what he deserved. But there is so much more to the story when Christ is involved.

Judas was present when the Apostle Peter declared that he’d die before betraying Jesus; he did so three times. And yet Jesus forgave him and restored him. Remember the story of the woman caught in adultery? At the end of a humiliating ordeal, when she didn’t see any of her accusers present, Jesus said those beautiful words, neither do I condemn you, go and sin no more.

What I read in Scripture makes me believe that the same grace and forgiveness that was afforded to Peter, that woman, and countless others was also available to Judas…if only he hadn’t already pronounced ultimate judgment on himself and killed himself.

It’s amazing how hard we can be on ourselves when it comes to the truth of God’s grace. Sometimes, it seems easier to believe in grace for others, than it does to believe in it for ourselves. Does anyone know what I’m talking about?

Sometimes, it’s so much easier to tell others about forgiveness than it is to embrace it for ourselves.

Judas was wrong. He should have felt regret, sorrow, and remorse. But I wish he’d also understood the promise of hope in Christ. He spent three years with Jesus and didn’t really understand anything about him. Judas knew what he’d done. He knew he’d sinned. And he knew there was no hope for him…except there was.

You see, without the love and grace of God, we are left on our own to make the best of a bad situation when we make the worst sinful decisions in life. Often, we find ourselves in a hopeless place.

On the flip side, God uses our sorrow, regret, and remorse to lead us to repentance and forgiveness. Also, he promises that he can take all things and work them together for good for those who love him and are called according to his purpose.

What about you this morning? What is bringing you sorrow, regret, or remorse? Are you passing judgment on yourself, afraid there is no hope? I’m here to tell you that grace and forgiveness are available to you.

Please understand that God’s forgiveness doesn’t mean we will not have to pay the price for our actions in this world—sometimes that happens—but it does mean that God doesn’t hold it against us as we hold it against ourselves.

Scripture tells us that God removes our sin from us as far as the east is from the west. The trouble is that we do remember it and the enemy likes to bring up again and again and use it to question our sincerity and commitment to God. When that happens, we need to remind ourselves of Jesus’ words about the devil, “he does not hold to the truth, for there is no truth in him. When he lies, he speaks his native language, for he is a liar and the father of lies” (John 8:44, NIV). 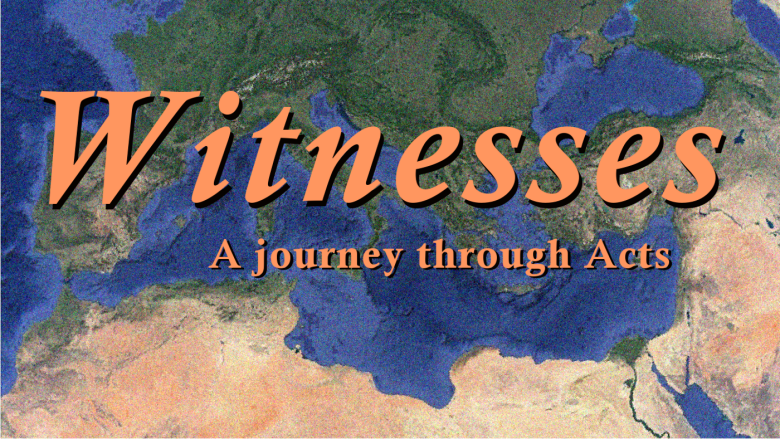 A journey through the New Testament book of Acts.